A taste of Travel

Home » Country » A taste of Travel

The cognac merchant is unique. Since the 18th century, he has been trained in Charente and then, at a very young age, sent to the markets in England, Russia and the United States. He learned the language and customs.
He returned home but always kept in touch. This tradition continues. A merchant no longer makes a will before leaving on a trip as he did not so long ago, but accepts the long ago, but he accepts the risk. It is the spirit of the open sea that drives him.

Read the article written by Alexandre Gabriel, vice-president of the BNIC, in “L’incroyable saga du Cognac” published by the Revue des Deux Mondes.

The success of cognac is the fruit of a long, particular and undoubtedly unique history. Cognac has been deeply rooted for centuries in its land, the land of the Charentes region, so favourable to the cultivation of vines since the first centuries of our era, which defines it, but also turned towards the open sea by the proximity of the Atlantic Ocean. Therefore, since the 17th century, its history is linked to maritime transport. Its reputation very quickly crossed not only borders but also seas, making cognac a spirit that has conquered the world.

To what do we owe this particularity, this singularity of cognac which combines ancestral traditions anchored in its terroir with a modernity and dynamism which have lasted for centuries?

Several unrelated factors have played a determining role. In the 16th century, Protestantism took root in the Charentes region. The Protestants or Huguenots, as they were called, played a major role in the history of cognac, even in the most difficult periods due to the persecutions to which they were subjected (see page 58). Inveterate workers, they have largely contributed to giving cognac its character and the quality it has today.

Paradoxically, the revocation of the Edict of Nantes in 1685 was to serve the cause of cognac. Indeed, the Huguenots of Charente, often educated, as a result of reading the Bible, emigrated en masse, and among the emigrants were farmers who produced wine and cognac, two products which had long been exported to northern countries. 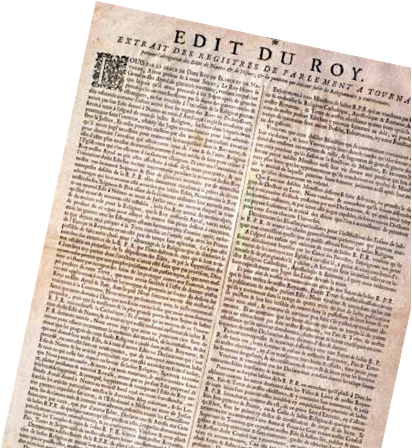 Poster reading the revocation of the Edict of Nantes, on October 18, 1685 © Alain Gesgon/CIRIP/ AKG-Images

When they left the country and consequently their vineyards, they took with them their know-how of this great spirit that they had shaped, while keeping a close and strong link with their land of origin and their family back home. Some of these emigrants from Charente became, at the beginning of the 18th century, importers of cognac supplied by relatives and friends, and took advantage of the situation to create a clientele, thus contributing to the development of the trade in Charente products. From their sometimes temporary host countries, they left for South Africa, America and other continents, each time implanting cognac, this famous spirit from their land of origin of which they kept the pride. This is how these native Charentais have contributed to make cognac a spirit turned towards the world but faithful to its original DNA, roots and quality.

In 1643, Philippe Augier, from Châteauneuf, founded the first trading house in the heart of Cognac. He worked with other members of the family in Tonnay-Charente and La Rochelle in the export of goods to England and Flanders. Another early merchant, Guy Gautier, began selling eaux-de-vie in 1697. The second factor that played a crucial role was the arrival of great merchants from different European countries, inspired by the nascent success of cognac and by this unique model.

In fact, during the first decades of the 18th century, a number of foreigners from the British Isles and Ireland, attracted by the commercial potential that the commercial potential that cognac already represented because of its quality, came to Cognac to set up trading houses. For example, Jean Martell in 1715, Thomas Hine in 1763, then Richard Hennessy around 1765, but also James Delamain, from a family of Huguenots who emigrated to London at the beginning of the 17th century and who later settled in Ireland. Later, in the 19th century, came the Meukow brothers from Silesia and the Norwegian Thomas Bache-Gabrielsen in 1905.

These and other merchants played a major role in the expansion of cognac throughout the world. These merchants from elsewhere settled, integrated, often married into local merchant families and from there went on to conquer the world. They tried to weigh with their peers in politics so that the road of exchanges is never closed, in order to make this product of Charente agriculture shine on the five continents. In those days, people used to update their wills before setting off with cognac in their suitcases.

Today, 98% of cognac is exported. Like his predecessors, the head of a cognac house, whether it is a family business or belongs to a large group, spends most of his time on the markets, abroad. A polyglot, he is always an expert in logistics and customs issues and masters maritime transport. He juggles with time differences and has one meeting after another with clients and distributors.

Driven by his passion for cognac and his taste for travel, he perpetuates, through his work, the cosmopolitan character of this exceptional spirit. While the great cellar masters continue to create unique blends, teams in the four corners of the world are learning about local cultures and new trends to better share cognac.

The name cognac is undoubtedly, along with Paris and the Eiffel Tower, one of the best-known names from France internationally, and the Charente community continues to take great pride in it. This region, open to the world, has been able to combine the talents of winemakers who work their vineyards with passion and distill their wine with the know-how of merchants, who are both cellar masters, creators of exceptional blends and merchants who criss-cross the globe. Throughout history, cognac has always remained a reference. Today it is one of the symbols of French excellence, for connoisseurs and the world’s greatest bartenders. An elaborate marketing strategy supports this recognition and aims to promote and publicize the excellence of cognac, its richness and diversity embodied by multiple houses, each with its own signature, often rooted in the centuries. Embodied by the cellar masters, holders of a knowledge of exception, it is relayed by the teams and sharpened “activation” campaigns. The brands work closely with the prescribers, connoisseurs and opinion leaders who allow cognac to shine throughout the world. The strength of the brands and their diversity accentuate this success. They have been able to create special links with their consumers and, in some markets even more so, with entire communities.

When you raise a glass of cognac to the light, you see beautiful golden colors shining like an autumn sky at sunset. You have in your glass an olfactory and gustatory landscape, but also, in a few centiliters, five centuries of history, of the marvelous history of this spirit which is nevertheless incredibly modern, exported, tasted and appreciated all over the world. 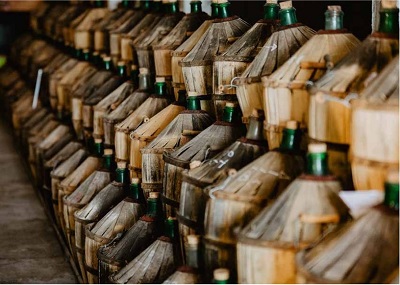 The “dames-jeannes”, guardians of the precious eaux-de-vie of De Luze cognac. © Maison Boinaud

In the second episode, Elodie Buyer winegrower in Biron tells us about her commitment to ...

The continuous march of the habitat in Charentes

In Cognac, I travelled through roads of the Grande Champagne region of Cognac