The vernacular heritage in the landscapes of Cognac

Home » Country » The vernacular heritage in the landscapes of Cognac

Be prepared to (re)visit the vernacular heritage, extracted from the work, ” the landscapes of Cognac ” realized under the direction of Gilles Bernard and Michel Guillard.
Wash houses, fountains, wells, mills, pigeon houses…, these modest buildings are the witness of the life of our ancestors, traces that inform about the daily life and the quality of the social fabric of the past. 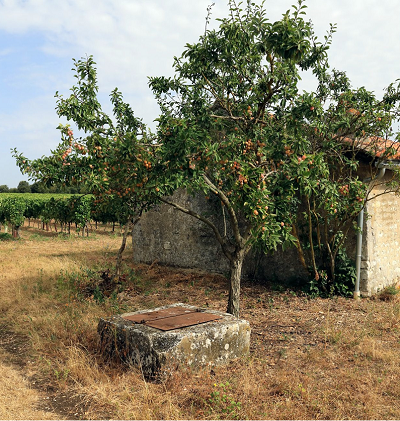 Vineyard hut in the Aigre region with its usual fruit tree.

Their use is functional, but their utilitarian vocation did not exclude a certain originality and aesthetic research. Adapted to the traditional way of life, they were built with local resources and a know-how transmitted from generation to generation. This vernacular heritage reinforces the identity of a territory and is an integral part of the landscape of our lands.

Before water arrived in each house, it was necessary to go to the well or to the fountain to get water. Sometimes simple stones from which the water flows, sometimes more sophisticated with several stone basins and a stone trough to collect the water, the fountains had one or two horizontal crossbars under the jet to put the bucket. Often located in the middle of the village, they have become an embellishment issue. 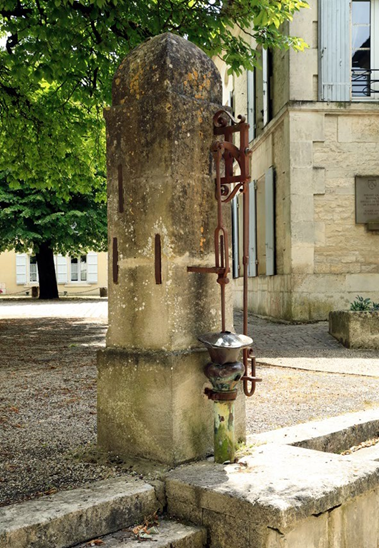 On the church square in Sigogne, one can see a pump installed on a cistern in 1876.

It is most often a more or less deep hole dug by man to draw water from the groundwater. In most cases, it is a circular masonry construction. The entrance is usually marked by a stone curbstone. Often a superstructure in ironwork allows a pulley and its rope to be suspended to lower a bucket. Various shapes can decorate it. The wells are often private, but in some villages the inhabitants agreed to build a common well on the public road. 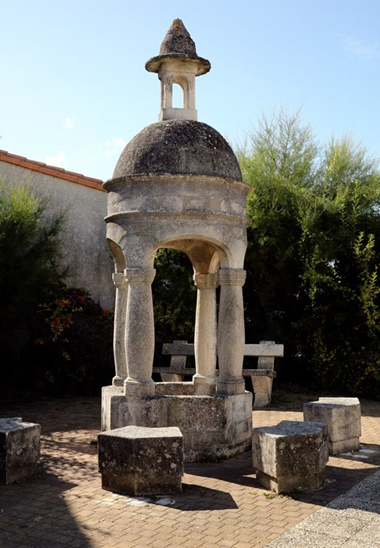 Various forms can decorate the wells, like this one, in Arvert, dating from the 18th century. Its dome surmounted by a lantern is carried by four columns.

Precious in the rural economy, mills became widespread from the 12th century. Equipped with two large circular millstones between which the grain was crushed, they made man’s work easier. In the windmill, the driving force was transformed into rotary motion by the wings. The mill had a mobile frame that turned with the roof by means of a long pole that allowed the miller to orient the wings to the wind. The whole thing slid along a well-greased wooden track. The wings, often four in number, were sheets fixed on a wooden structure. The upper parts of the mills have disappeared, leaving only stone towers, often ruined.

A seigneurial privilege until the Revolution, the dovecote had to be built on the fief of a farm. The number of boulins or nesting boxes corresponded to the surface area of the farm: 1 boulin represented 1 arpent of land, i.e. about 40 ares. The importance of the dovecotes thus depended on the size of the properties. Isolated, built near the dwellings or integrated in the agricultural buildings, round or square, more or less high, they are beautiful buildings that one notices in the countryside. They can be identified thanks to the eaves, a protective strip that surrounds the building at three quarters of its height. The dripstone protected against rodents by preventing them from entering through the upper openings. One or more east and south facing dormers provided sunlight in the winter and also allowed birds to fly in.

The whitewashed interior was equipped with clay nests in which the pigeons were housed and brooded. With several broods per year, the breeding of pigeons constituted a source of income, their droppings, called colombine, being a sought-after fertilizer. It was even mentioned in marriage contracts! The pigeons were locked up during the harvest period. After the Revolution, the construction of these buildings was democratized and developed on properties with more modest dimensions. Various fertilizers having replaced the dovecote, the breeding of pigeons gradually stopped. 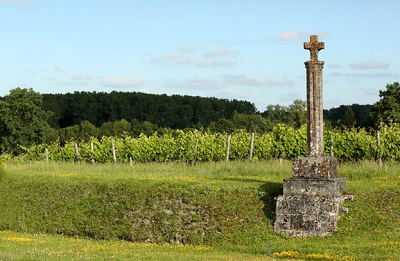 In Ambleville, in Grande Champagne, a beautiful stone cross watches over the vines.

Established on rivers, near springs and villages to be easily accessible to the washerwomen, the washhouses appeared in the 18th century and developed in the 19th. Their architecture is generally sober, with sometimes a roof, an inclined plane on which one installed, plunging in water, a board to rub the linen. Basins could be built, often rectangular with a paved bottom and barriers to drain the laundry. The “small linen” was washed regularly, but the sheets and cloths were quickly rinsed with clear water and changed every month. After drying them, they were stored in the attic while waiting for the bughée, a big laundry organized twice a year, before Palm Sunday and around All Saints’ Day, by the women of the village. Up to 30 to 40 pairs of sheets and cloths were washed in sandstone vats, called ponnes, containing between 100 and 400 liters of water. Bags of ash were used as soap and iris roots were used to perfume the whole. A fire was lit under the ponnes and the linen was sprinkled with boiling water. The operation lasted between four and five days. The linen was then rinsed abundantly in the washhouse, then wrung out and laid on the grass to dry. 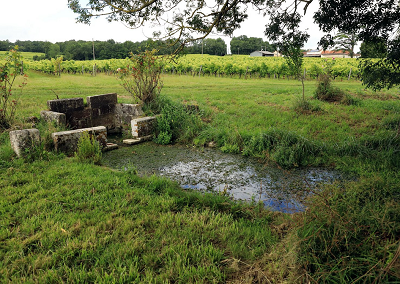 Established near springs and villages to be more accessible, the washhouses will develop in the 19th century.

DISTILLATION | The double distillation process is a legacy to preserve...