The vineyard landscape: a landscape shaped by man

Home » Country » The vineyard landscape: a landscape shaped by man

The development of wine and brandy consumption has led men to shape the landscape. Sources of emotions, the wine landscapes must be apprehended with all the senses to perceive their cultural richness. (Re)discover this landscape shaped by man in the work “les paysages du Cognac”.

Several tens of thousands of years ago, man learned to domesticate a wild vine that became the vine. It was first to produce a sweet and delicious fruit, but very soon, with the discovery of the virtues of fermentation, men elaborated a drink. This was the birth of wine. Later, with the progress of alchemy and the development of distillation, they began to produce wine brandies that concentrated the quintessence of wine. The vine, the wine and the brandies which are resulting from it were from their origin elements of culture and markers of civilizations. This is all the truer that the vine is a plant whose production, apart from the grape, is not essential to the basic needs, unlike cereals for example. As an element of cultural identity, the vine became an object of ornament and decoration, a stake of power and political struggles, but also a major element of the economic development of some regions.

The development of the consumption of wine and brandies led men to transform and shape the landscape. The vine being a perennial plant that remains in place for several decades, its plantations very quickly drew a stable landscape that quickly became familiar and characteristic of the region, the land and the ecological constraints to which man had to adapt.

This is how the notion of vineyard landscape was born. It is a recent concept, which associates the observed object (the vine and its environment) and an observer. This interference and this balance create an emotion and a sensitivity which are very subjective but reveal a force which makes all the attraction of the vineyard landscape. The aesthetic reading is followed by an emotional appreciation that obviously refers to the wine or the brandy associated with the perceived landscape.

The vineyard landscape is thus the aesthetic expression of this culture and this civilization of the vine and the wine. It is the expression of the men who shaped it and of the soils which carry it. The culture of the vine by its agronomic and technical requirements has always imposed very specific constraints to the wine grower. Thus, he will plant the vine on well exposed hillsides in order to protect himself from la2te spring frosts, while at the same time benefiting from the best terroirs. Or he will shape the slopes of the mountain to install terraces with the best exposure. Thus, have developed multiple viticultural landscapes that are the expression of this culture of wine and the constraints that men had to master over the centuries. It is thus clear that since man knew how to domesticate the vine, he has shaped and designed an original landscape in order to guarantee a production of grapes and therefore of important and quality wine. He has always wanted to satisfy this requirement of excellence for his production which represents the reputation and the image of his work.

Autumn is a pivotal and unstable season. Storms arrive on limestone plateaus still burned by the last rays of summer sun.

Winter always has surprises in store; from mid-January onwards, moments of thaw awaken the sap.

From December to March, the Charentes are hit by disturbances from the west and southwest, but very rarely covered with snow.

Spring is early and bright.

The vineyard landscape can be described according to the perception that one has of it, according to its form or its aspect. This is how we commonly define landscapes that are identified with seas of vines, sometimes with waves, or landscapes that are described as marquetry, because the geometric lines are comparable to the work of the cabinetmaker, or the vineyard landscape as a postage stamp, because in some cases the vines are isolated in a larger landscape with a very different geometry. There is therefore not a single vineyard landscape, but a multitude of landscapes which are the expression of man’s creation to adapt the environment to the vine by the choice of the soil, the exposure to the sun, the relief, but also to adapt the vine to this environment by the choice of the methods of management, the grape varieties…

If the vineyard landscape is obviously constituted by the vine, its arrangement in space and its mode of management, it also associates the architecture of the buildings necessary to the exploitation and the economy of the production: dwelling houses, wine storehouses, ageing storehouses, houses of trade. The architecture of the vineyard landscape always associates the technical and operational aspect with the aesthetic and social aspect. This relationship between the practical and the aesthetic is all the more marked as wealth is present in the vineyard and the image of the product is often constructed by visitors.

The prosperity of a vineyard is always associated with the capacity to transport the production to the main markets. The presence of a river and the proximity of ports are all necessary assets for the development of an economy. The economy of wine or wine-based spirits is no exception. It is undeniable that the Charente and the ports located near its mouth explain the development of Cognac over the past centuries. Other vineyards have also benefited from this situation: Bordeaux, Porto, Jerez and many others. This explains why the river and its surroundings (wharves, merchants’ houses, warehouses, etc.) play an important role in defining the winegrowing landscape, since they were essential, and are still often necessary, for the trade of the products of the surrounding vineyards.

The vineyard landscape, like any other human creation, has had to evolve and adapt in order to continue to provide a living for the men in charge of it. Climatic evolutions, sanitary crises such as phylloxera, technical evolutions with the mechanization of the work of the vine, but also economic constraints such as the development of the means of transport and all that makes the life of the men considerably impacted the evolution and the changes of the wine landscape. But the wine landscape has always survived only thanks to the courage and the spirit of enterprise of the wine growers and merchants because the vine is a demanding plant that requires attention and perseverance, the harvest never being assured and the quality never regular.

A constant appears for the one who knows how to read with attention the evolution of the landscape. Over the years, man has constantly shaped it by combining respect for nature and the rigor of the craftsman who is always concerned about the quality of his product. This preoccupation with the environment is, in the end, only the obligatory understanding that the winegrower has of the symbiosis between the vine and its soil, a symbiosis that he has understood the necessity of for centuries and of which he is the heir who will have to pass on in his turn.

If the vineyard landscape is a source of emotions, it must be apprehended with all the senses. Tasting a wine or a wine brandy makes understandable this link and this so particular flavor between the vine and its soil and the men who shaped it. The beauty of a vineyard landscape inevitably leads us to the quality of the product that comes from it, just as tasting a wine or a brandy leads us to the landscape and the men who made it. 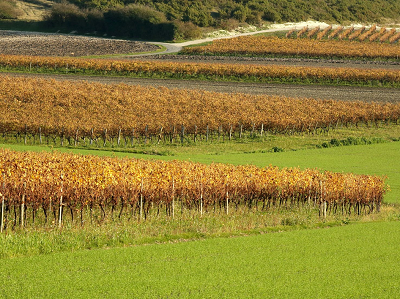 The shimmering colors of the autumn vineyards in Petite Champagne.

Today, the development of the wine economy and its globalization have led to the creation of new landscapes. The vineyard landscape represents an important component of the message delivered by the commercials, because the aesthetics and the emotion felt by the consumer are essential to the valorization of the product which is issued from it. More and more, the vineyard landscape is becoming a founding and inseparable element of wine and wine spirits. Without having the history of the European vineyards, these new vineyards have been able to create new landscapes that obey the same constraints as those already mentioned. Always, we find this constant preoccupation of the choice of the soil and its environment carrying quality. We understand the layout of the plots of land which adapt to the requirements of mechanization and human work. We observe the buildings necessary for the work of the wine and its expedition. In this way, the seeds of a wine culture develop in places that are conducive to quality, and over the years these new terroirs should become more widespread. Because if the vine and its soil are there, the men who bring the necessary know-how to these new vineyards do not yet have the history, the memory, the habits and the customs which are the identity of a culture.

What is the future for wine landscapes? Two major changes are already taking place.

TRADES | The trellis constructor build the physical support to the vines....

DISTILLATION | The double distillation process is a legacy to preserve...